The children were invited to the Peter Studios, Media City, Manchester, to take part in a live show and to be part of the studio audience.

The children were at the studio for four hours, allowing them to take part in the dress rehearsal and then have a quick break before the live show.  After meeting the presenters and crew the children also got the chance to ask them lots of questions about working in TV and filming Blue Peter, as well as meeting Henry- the Blue Peter dog.

“The children loved seeing the studios, cameras, lights and how everything comes together for a live show,” commented Miss Vaz, who accompanied the children.

During the show the children appeared on the screen lots, cheering enthusiastically and doing countdowns as well as dancing and clapping as the live band performed.

At the end of the day, they were all presented with Blue Peter badges which will allow them free entry to lots of UK attractions.

Finley Docksey (age 8), “Being on Blue Peter made me feel excited and I can’t wait to go to places using my Blue Peter badge.”

“The whole day was really exciting and I loved meeting all the amazing presenters,” said Isla Redwood-Sayce  (age 9). 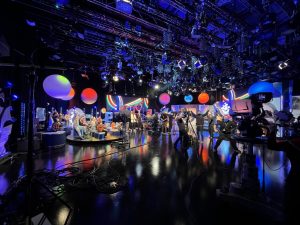